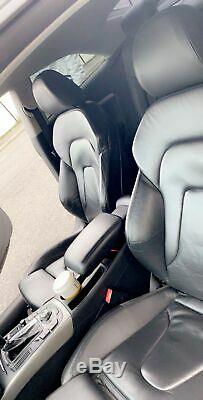 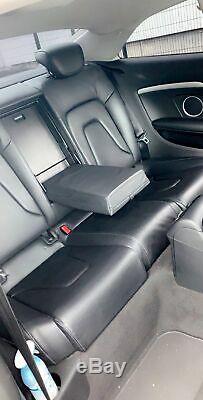 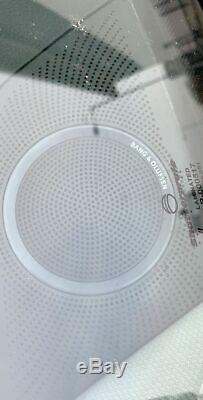 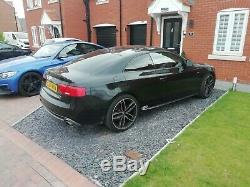 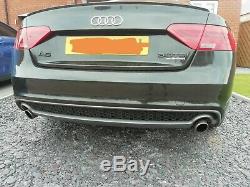 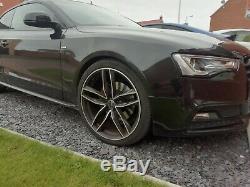 I HAVE CHANGED THE WHEELS FROM 19" IN THE PICTURES TO 20" RS6 STYLE. WILL ADD PHOTO SOON OF THEM. FEW STONE CHIPS/MARKS IN/AROUND CAR BUT IS HIGH MILES ON IT, DRIVES AND PULLS IN ALL GEARS. NO SWAPS, COLLECTION FROM HULL CITY. LAST OWNER WRITE UP BELOW.

Genuine but reluctant sale of my Audi A5. No expense has been spared when it came to maintaining and looking after her. The mileage is at 228,000 and the reason behind the high miles is simply that the car has spent most of its life cruising on the motorway and thus not putting any stress on the car.

It has 4 previous owners and when I took ownership back in 2015 I knew it needed a little TLC so as a result under my ownership, I have literally restored the car back to its original condition with the added bonus of a Full Black Edition Facelift. Colour-Phantom Black, this colour is an added premium option by the dealer which costs more than the normal jet black. The condition of the body work is good, I had it fully restored and ive since always polished and protected the paintwork, there are stone chips on the bonnet and bumper. To my amazement this car comes with full Chesire Audi dealership history up to 180k miles, after that Ive had it serviced by a private garage only using genuine Shell Ultra Engine Oil and other genuine service parts.

This car is truly a sleeper, it has the best 3.0Tdi engine and ZF gearbox combo which have been professionally remapped to produce just over a modest 305BHP and over 500Nm Torque. 0-60MPH is around 4.9 Seconds. Top Speed limited to 155mph. MPG is very good, still get up to 45-50mpg on motorway and local is around 30mpg.

This gearbox is a ZF6HP28 Tiptronic gearbox which is very reliable!! (Tiptronics can handle a lot of power and are reliable and that is why they come standard in prestige cars like the Audi RS6 or RS7). When I bought the car I had the gearbox full taken out and professionally reconditioned including a brand new mechatronic by Automatic Gearboxs based in Huddersfield. I also had the Torque convertor reconditioned by EJ Rose in Mansfield, he is a ZF approved specialist. Nearly every single part of the suspension, including Arms, Wishbones, Bushes, inner, outer track rod ends, cv joints and many other suspension components are less then a couple of years old. There are 2 types of quattros (Haldex and Torsen) This car is a Torsen Quattro meaning its a mechanically run quattro which will never fail, the Torsen system comes in high performance cars like the RS6 and RS7. The haldex system is in cars like the rs3 or golf r which I also own and I can tell you they do not hold traction like the Torsen driven quattros. The A5 will purr through the snow unlike the haldex which will hold next to zero traction. Injector seals all changed recently. Brembo Brake Pads and Disks all around. Alternator and all pullies and belts changed. Both side Actuators changed along with swirl flaps. TWO keys, full log book, book pack and tons of receipts and paperwork/ service history. MMI System upgraded to latest Sat Nav. Day Time Front and Back running lights.

Three way climate control, auto lights, wipers. To summarise, its a beautiful car that drives amazing and is a real head turner, number plate blurred out due to online fraudsters. Ive listed the car at a very fair price and in no rush to sell. Car is currently on private plate which I will be taking off. The item "Audi A5 3.0 Tdi Quattro Tiptronic (2008) Black Edition Facelifted to 2016 310BHP" is in sale since Wednesday, August 7, 2019.

This item is in the category "Cars, Motorcycles & Vehicles\Cars\Audi". The seller is "read*alot" and is located in HULL. This item can be shipped to United Kingdom.